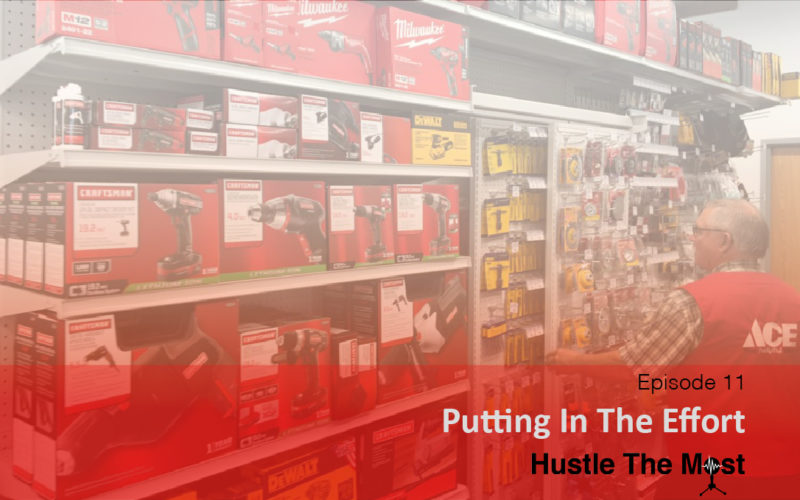 Hustle The Most Episode 11: Putting In The Effort

Hustle The Most Episode 11: Putting In The Effort

I really feel like putting in the effort will get you anywhere you want to go. I remember when I was kid I would always rush through my chores or whatever work I was doing just so I could do nothing. I think even when I started my first job I didn’t really understand what working was all about. My first job ever was at KFC. I was 16 and Eric who played in Jive and Spit with me got me a job there. Minimum wage at the time was $4.25 an hour. Which even to this day still blown my mind. My dad used to tell me how lucky I was because he used to pump gas in the freezing cold for a Nickel. I still don’t know if there was any real truth to that it seems a little low. I remember getting hired to work at KFC, I had to go to orientation. The orientation was help in this little out building the was painted like a small KFC. I seem to remember people calling it the chicken coop but I could totally be making that up. I was hired to be a cook I was going to cook chicken. The orientation was a lot more geared toward people working in the front. I remember there being some sort of customer roll playing around upselling and I remember me being super uncomfortable and bad at it. I wasn’t going to be anywhere near the front counter or dealing with customers but I still had to do the drill. There was one situational question where I was supposed to ask the person playing the customer if they would like to order a drink and I my response was something like “would you like something to wash down that chicken?” I can’t even believe I said that that’s probably the worst upsell in the history of upsells. Wow. What a bonehead answer! I think everyone laughed and she corrected me and we just moved on. The orientation was like 8 hours long and it was pretty much the worst thing ever but looking back on it I think that’s a right of passage that everyone should experience at least once in their life. 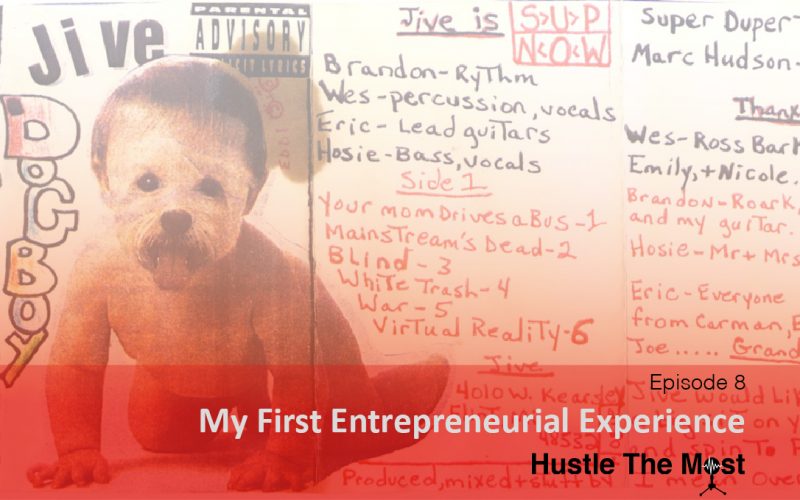 Hustle The Most Episode 8: My First Entrepreneurial Experience

Episode 8: Being an entrepreneur is kind of scary because there is always some sort of risk involved. We know that risk and assessing risk is definitely a learned behavior. 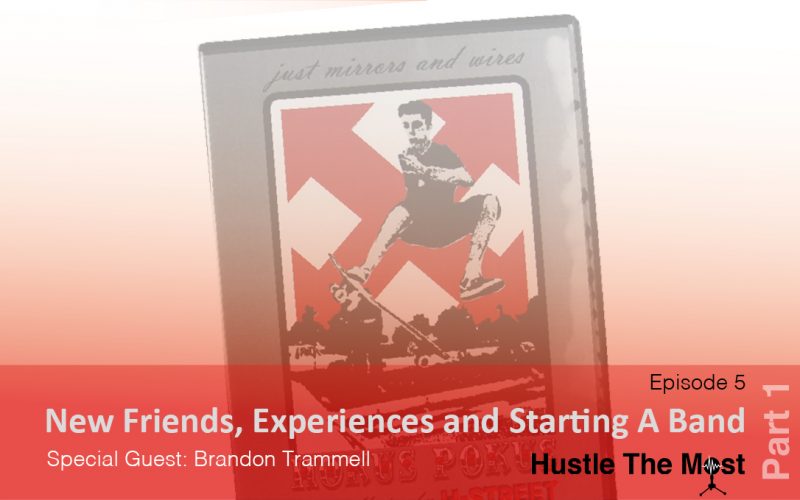 Episode 5: New Friends and Experiences (PT1): is about growing up skateboarding in the early 90’s and starting a punk band.

I think like most other kids I went through my share of fads and interests. I feel like it was always whatever the next thing was. Whatever your friends were into it was like we all just fell into it together. If it was sports, or music, or hackey sack or whatever we all kind of did it together.

I was so lucky and thankful to have my life long friend drive 2 hours across the state to join me for this podcast episode.

Personal Note: Brandon and I have been friends for 29 years and have a lot of amazing history together. Aside from our stories together Brandon has played guitar in a number of amazing bands like Kid Brother Collective, Spit, Braided Veins and many more. He is a food enthusiast, a great guitar player, songs writer and arranger, a dad, husband and more. I am so grateful to have met him all those years ago.

One of my childhood best friends named Brandon lived outside of my neighborhood. Before we were friends i would see him cruising down my street on his skateboard he was coming to pick up his sister. She used to hang out with my nextdoor neighbor.

He was this skater kid that was a few years older than me. I would see him on street and he would always be rocking these skate clothes and like Airwalks or something I remember he had of his head shaved with something shaved into the back and sides of his head. I think sometimes it was an H-Street logo which was a skateboard company and sometimes said DRI which was an acronym for the band Dirty Rotten Imbeciles.

Brandon lived on the other side of atherton road about a half mile from my dad’s house. Thinking back I don’t really remember how we actually met but I remember that we quickly became good friends. We pretty much lived at eachothers houses for years. We mostly stayed at my house because his family had small house that he shared with his mom, brother, sister and new born sister. He was my first real skater friend. He’s the one that got me really hard core into skateboarding. He was way better than me so it’s like I was always learning how to do and try new stuff from watching him. There were a few other friends that I hung out with in the neighborhood that were semi into skating. It wasn’t before too long that we all started hanging out together. We started a club that was called USA! The United Skaters Association. We had stickers made that were probably the worst stickers of all time. Paper stickers that just said USA and under it it said United Skaters Association of course. Black and white, paper stickers that were printed on a sheet of 8. We actually had a made a little hang out spot in my basement where were had a table for working on our boards and where we kept our skate journals. These were little books where we documented our progress. Hahaha looking back it it’s actually pretty funny that we did this. We even had a “trick of the month” where everyone in the club had to learn the trick of the month. USA started having sleep overs where we would watch skate videos on VHS and watch 120 minutes on MTV where we would see all these random and obscure videos from punk bands like Bad Religion, The Cure and Ministry that they didn’t play during the day time.

We would sometimes plan on skating one day and we would wake up and it was be raining or wet outside or sometimes it would even snow. We we wait and watch skate videos until it dried up or we would walk our boards to a dry place like under an overhang or something. We just wanted to skate. Watching these videos would get us pumped that we would leave the house at 4 AM to go and skate parking lots that we could only skate when the bars and businesses were closed and there were no cars in the parking lot. We had this thing we called the Fenton Road Modeal. We had a line of places all the way down this road that ran through the south side of Flint called Fenton road. It was lot after lot each having different curbs, banks, parking blocks and drop offs that we would just shred for hours and hours. We would often up at Taco Bell looking for something to drink. This was about the time that Free Refills stated to become a thing but they were still behind the counter. We would all pile into a booth and get one small drink and pass it around. Last person had to go up and ask for a refill. Eventually they cut us off and we would head back out to thrash some more curbs. We would skate like 8 miles down the road and then have to skate back. The route back was more direct. More like a “just get home” already kind of route. Sometimes we would cut through neighborhoods or fields that would get us home quicker.

We would skate from like 4 AM until about 4 PM and just come home dragging bruised, sometimes bloody.

I remember one time were skating this parking lot of the FOX66 office and there was this giant stair set that was like an 8 stair. And he said “if anyone ollies down these stairs and lands it first try I’ll shave my head” I grabbed my board and just flew down the sidewalk and just popped it. I floated down the stairs and landed it and did a power slide and was just like “were gonna shave your head” !!!!

I talked a little earlier about friends all kind following the same trends together. Brandon and I were no different. I remember we had this conversation on the phone about how he had just got a guitar. I guess he had been playing it a lot while babysitting at his neighbors house that owned the guitar, and how he had learned a few songs. Anyway we were talking on the phone and he told me about getting  the guitar and I said “dude, I’ll get some drums and we will start a band”. Now keep in mind I didn’t play the drums nor did I know anything about drums. I think I played a set once at one of my neighbors house but I didn’t gravitate toward it or anything. It just came out. I was going to be a drummer.

In a matter of days we formed a band. We were jamming in our friends Chris’ living room, my basement, his garage and anywhere we could make noise and not have the cops called on us. The cops were called on us a few times but more than likely it was because we were an awful sounding band!

Coming up with a band name is always the best/worst part of being in a band. Some of the best bands have the worst band names. Think of your favorite band and think about the name and then ask yourself what does that really even mean?

So what did I learn from spending 2 hours hanging out with Brandon?

I learned that we are still the same silly kids we were when we were 13 but now we have kids and careers and do adult stuff. When you have a 20-30 years of history with someone looking back can be awesome, eye opening, funny and even a bit frightening.

I think that when you get older you still have friends but you see them less often and they are replaced with things like work, running kids to practice and other daily task oriented stuff. This has always been a tough one for me to handle as I have gotten older because I love my friends so much and I want to always see them as much as I can but life just happens.

Lastly I really think that getting old is more awesome than I would have ever imagined when looking back at it. All the knowledge we have acquired and the relationships that we have forged over the years are all the things that make us who we are today.